In response to user feedback on poor network performance, ICTO makes the analysis on the calls received in 2018, the problems are identified and ICTO has taken actions to resolve the problem. The detail analysis is shown as following:

As there are many different factors that can cause the poor network performance, if you encounter wireless problem, please contact ICTO Help Desk for further investigation and solve the problem.

In the following paragraphs, we would like to explain further about the situation regarding the restriction of access to China websites and the compatibility issue of user device when using 5GHz frequency band.

Situation regarding the Restriction of Access to China Websites

The Internet IP Address of users were blocked or restricted to China websites.

User will experience slow respond or even no access to those websites.

What Should I Do

Please send the local IP, data/time and website/App that has access problem to icto.helpdesk@um.edu.mo for checking.

How to Find the Local IP Address 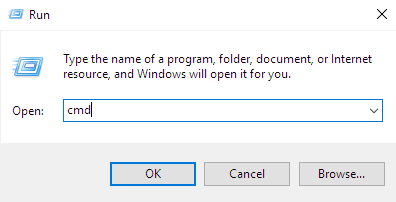 What We Have Done

ICTO will report cases to Macao ISP (CTM) to renew the Internet IP in order to solve the problem. In addition, ICTO has increased the Internet IP pool to lower the possibility of this situation from happening.

ICTO is providing 5GHz wireless network since 2014. On UM Campus, our wireless access points support the standard of IEEE 802.11b/g/a/n/ac for frequency bands 2.4 GHz and 5GHz to provide the speed up to 450Mbps for wireless connections.

In the wireless LAN environment, 2.4GHz mainly works in 2.4GHz wavelength providing three non-overlapping channels known as 1, 6 and 11, while 5GHz works mainly in 5GHz wavelength in which channels are opened differently in different countries.

There are different factors that interfere with the user experience.

In addition, many WiFi-enabled and other household devices use 2.4 GHz band, including wireless keyboards, cordless phones, microwaves and garage door openers. When multiple devices attempt to use the same radio space, overcrowding occurs. The 5 GHz band tends to have less overcrowding than the 2.4GHz band because fewer devices use it.

On the other hand, 5GHz can only provide shorter range coverage than 2.4GHz by its physical limitation. The reason is caused by its high frequency which cannot penetrate the walls and obstructions on its way compared to 2.4GHz.

Last but not least, the eventual speed user experienced will also depend on how many users sharing one access point, the internet bandwidth behind the connections and the performance of the visiting site, etc.

User may experience network disconnection and no Wi-Fi signal when using those channels on Apple devices or devices of certain brands.

In 2018, we found the similar case on the mobile device of some Chinese brands. Devices could only use the wireless channels opened in China.

What We Have Done

ICTO sent the feedback to Apple support. The problem was solved in the update patch of 2017.

ICTO measured the amount of usage of those branded devices and evaluated the influences. In January 2019, ICTO configured the supporting channel numbers to fix the problem in residential college areas.